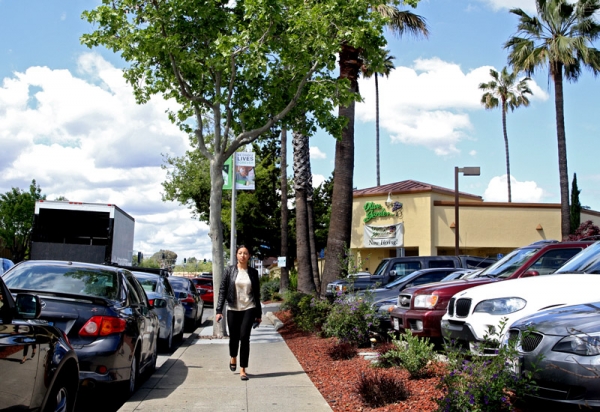 In the latest sign of the construction boom happening around California Avenue, planners in Palo Alto are considering a proposal to demolish the Olive Garden building on El Camino Real and replace it with a three-story development that would be four times the size. dense than the existing structure.

Prolific architect Ken Hayes’ proposal calls for the merger of two plots at 2515-2585 El Camino Real and the construction of a 40 foot high development with 13 residential units, offices and retail on the ground floor. – floor. It would be just down the street from another development proposed by Hayes: a four-story office building that would go up to a currently vacant parking lot on the corner of Page Mill and El Camino Real.

As are nearby developments – such as the one-block long mixed-use project at 3159 El Camino Real, around Equinox Gym; the recently approved office development at 385 Sherman Ave .; and the three-story building replacing the former Club Illusions at 260 California Ave. – the proposal of 2515-2585 El Camino Real illustrates the untapped potential of the existing zoning.

While planned community projects destroying the areas have suffered the brunt of the community’s anger (as evidenced by last year’s referendum on a real estate development on Maybell Avenue), the Olive Garden property shows the boom in housing development. construction around California Avenue does not need any zoning exceptions to continue. Because it conforms to existing zoning, the project in many ways embodies the constraints the city faces in its efforts to limit office development and address parking issues in its two busiest shopping districts – the downtown -City and California Avenue.

The project would be located on the east side of El Camino Real, between Sherman and Grant avenues, on two plots that would be merged. Both plots are currently zoned for â€œneighborhood commercialâ€ and â€œcommunity commercialâ€ use, allowing things like malls, supermarkets, and mixed-use projects.

The restaurant on the ground floor would share space with offices, while the 13 apartments would occupy the second and third floors. There would also be offices on the second floor, according to project plans.

The facade of the building would be parallel to El Camino Real and a plaza would face Sherman Avenue, the request says.

Although the construction density at the site is almost certain to increase, the design of the project is still evolving.

On November 20, the city’s Architectural Review Board conducted a preliminary review of the project, which by definition includes no votes, and offered a mixed response.

President Randy Popp called the building too “horizontal” and “monolithic,” although he acknowledged that the city’s height limit severely restricted an architect’s ability to pursue a more vertical organization. While he focused most of his comments on the project, he reserved some criticism for the city’s 50-foot height limit, which drops to 35 and 40 feet in some areas adjacent to residential neighborhoods.

â€œThe height limit is an architectural disaster because you just can’t articulate the building in the right way with the buildings that we have,â€ Popp said. “It’s terrible.”

Other board members also expressed some concerns about the look and feel of the proposed development, which Alexander Lew says bears some similarity to the controversial Alma Village development.

Lew said he was concerned the building was “facing too much to the rear and the parking lot.” He also said he preferred other recent developments, including the Equinox Gym and College Terrace Center project, to the one proposed for the Olive Garden site.

Catherine Ballantyne focused on the context of the building and suggested that Hayes consider revamping her site plan. She also wondered if the proposed building really fits into its surroundings.

She noted that the six-story building directly across from El Camino Real is a “massive concrete structure” and asked if the city has a responsibility to somehow “balance” this structure with whatever is being built. on the Olive Garden website.

â€œI wonder if this building, as proposed, is the right building for El Camino, given its mass and the way it is contextually integrated,â€ Ballantyne said.

At the same time, the board generally had good things to say about Hayes’ site plan and his proposal to include the place. Although board member Kyu Kim suggested that the office space at the corner of Grant and El Camino Real be made more “open to the public”, he ultimately called the proposed development “aesthetic” and “good project”.

Popp also praised the layout of the plan, including the entry points, plaza and parking layout, while stressing that there are many architectural details that need to be fine-tuned.

â€œAesthetically, it looks massive and undefined in some ways,â€ he added.

Not all garden plants are picky