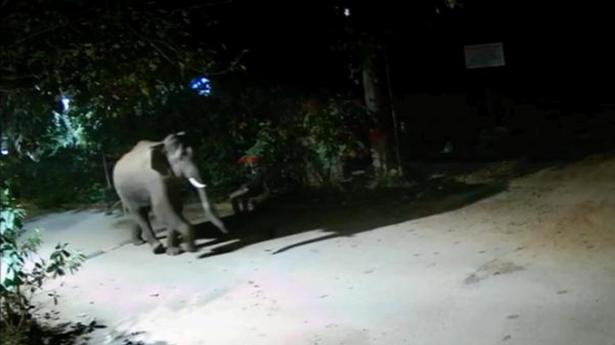 At around 2.30am on Monday, the security guard stationed at Good Earth Malhar in Kamnipura sat frozen in his seat as an elephant stalked past him in the residential development. Footage taken from CCTV cameras showed the elephant moving past him, turning and disappearing into the night. Video of the incident began to circulate widely later that day.

“This area is known to be an elephant corridor and they use this route from Bannerghatta towards Tumakuru. In the process, they cross Mysuru Road, Kanakapura and Savandurga. It is an annual migration for them. Every now and then we also have a passing herd,” said Chayant Gonsalves, a resident of Good Earth Malhar.

He also said that in the morning one of the residents found a broken wall in the neighborhood. It is suspected that the elephant may have broken it. “There were instances of elephants crossing Mysuru Road earlier too,” he added.

In January 2019, a herd crossing NICE Road made headlines.

Another resident, Nikhil Tiwari, said the elephant looked wet, indicating it could have crossed the Vrushabhavathy River. “We see this in January. It appears to be an old corridor where the development happened,” he added.

Residents suspect the elephant headed back towards Bannerghatta using the route it saw take in the video.

Custom Tiny Home has an interesting layout and plenty of space, including a dog loft

Clean lines and an open concept layout transformed this home