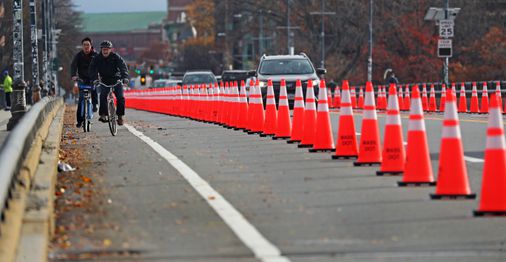 The change connects two protected bike lanes on either side of the bridge, one on Massachusetts Avenue in Cambridge and one on Beacon Street in Boston. Bike commuters celebrated the improved route on Monday morning, posting photos and videos on social media.

â€œI cycled this morning on the Mass Ave Bridge and it was wonderful!â€ Cambridge city councilor-elect Burhan Azeem said on Twitter with a video of his rainy crossing of the bridge.

Public transport and cycling advocates pushed for the bridge to be changed, citing drivers’ tendency to exceed the speed limit of 25 miles per hour. Bicycles made up 17.6% of vehicles using the bridge in fall 2019 and hit about 25% during rush hour, according to a City of Boston survey conducted in September of that year.

“We are at a critical time when we need to get more people out of cars to deal with our climate crisis, our congestion crisis and to provide more affordable means of travel,” she said in a statement. â€œMaking this bridge safer and more comfortable to cycle on will protect those who have cycled on the bridge and will open up exponential opportunities. . . “

Traffic cones placed in the two old car lanes will remain on the ground throughout the pilot and will be removed before major winter events and then replaced after the storm clears up, MassDOT spokesperson Kristen said. Pennucci, by e-mail.

Engineers and advocates will assess safety and accident data, traffic volumes, bicycle volumes and travel time of the Massachusetts Bay Transportation Authority’s Route 1 bus from Harvard Square to Nubian Square from the pilot to determine next steps, according to a press release.

The changes to the Massachusetts Avenue Bridge come a day after World Day of Remembrance for Road Traffic Victims. Defenders placed 4,000 yellow flowers on the steps of State House on Sunday to mark every life affected by fatal or serious traffic accidents in Massachusetts in 2020 and 2021. Since 2009, 105 cyclists have been killed in crashes with motor vehicles in Massachusetts, according to a new report from MassBike, a cycling advocacy group. He said the deaths resulted in road design changes in just 15 of those cases.

And that tally does not include Rebecca Bartczak, 39, of Amesbury, who died after being hit by a van while cycling in Salisbury on Friday night.

In the garden: the top 10 garden plants that cannot be killed